FOI contributes to the development of various technologies for assisting the emergency services. Among other things, it is assessing sensor technology for listening, imaging, and detection. This involves everything from finding hollow spaces in collapsed buildings to listening for survivors or detecting dangerous gases. 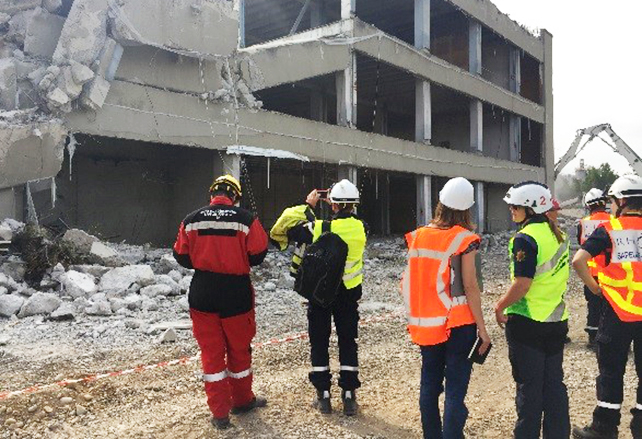 Experts after a controlled field test, in Lyon, when a building collapsed. Photo: INACHUS.

A snake-like robot with sensors that can take itself into hollow cavities and increase the chance of finding survivors. Radar sensors for detecting extremely small movements, such as those of a person’s ribcage as it inhales and exhales. Laser equipment for peering into dark openings. Chemical sensors that can detect the air from a person’s breathing. Or 3D simulations for determining how a building has collapsed and where one can best enter. A varying range of fantasy-whetting technologies are tested and evaluated within the EU project, INACHUS. Some of the technologies have been developed by FOI.

Helping those on the rubble

“FOI is successively building up its competence in sensors that both strengthen the Armed Forces and help the emergency services. Since the users – those who actually stand on the rubble – participate in the development work, early feedback can create a realistic overview,” says Gustav Tolt, senior scientist at the Division of C4ISR (Command, Control, Communications, Computers, Intelligence, Surveillance, and Reconnaissance), in Linköping.

It involves, among other things, simulating buildings that have been demolished by earthquakes, or explosions, to see how they have collapsed, and where it is best to proceed into hollow spaces, and find out how survivors can be found. The emphasis is on research and development, but it is not so much about developing products, primarily, as investigating which technological opportunities may lead to increased societal usefulness.

“There has been rapid technical development with regard to, for example, the size of sensors and their possibilities for collecting data at ever-increasing rates and with greater range, as well as, of course, that they can be used together with other equipment, such as aerial drones,” says Gustav Tolt.

In this EU project, FOI is collaborating with nineteen partners, in ten countries, in testing and validating various technologies for facilitating the emergency services during both crisis incidents and difficult working conditions.

Other participants have developed a snake-like robot with several on-board sensors that can enter into hollow spaces. Another contribution involves methods for homing in on mobile telephones in debris. Several participants have constructed an electronic “nose,” which can detect, among other things, elevated levels of carbon dioxide, low levels of oxygen, and flammable gases.

“We do tests together. The results are shared by all the participants. A major advantage is that we can receive immediate response from those who will use the technology. Collaborators include, among others, Södertörn’s Firefighting Unions.”

In future field tests, the project will check reporting channels and how information reaches the right receiver, as well as conduct a final demonstration of all the technologies included. The aim is to fuse many different ways of measuring into integrated entities.

A three-year research project, commissioned by the Armed Forces, has investigated the design and performance of future laser-based 3D-imaging systems. This involves different military applications, such as target recognition, local operational awareness, and mission planning. The final report, published last spring, describes, among other things, the possibilities for retrieving 3D laser scanning with the assistance of drones. In addition, experimental systems for so-called photon-counting laser radar have been investigated. These can measure extremely weak signal levels, which can be an advantage for avoiding risks during sweeping. Additional results involve the number of measuring points required, for example, in identifying an object such as a vehicle, and for more detailed information, such as the vehicle model.

“The project is now going further, as we build prototype systems where we can carry out physical measurements to see what practical applications the technology has,” says Gustav Tolt, at the Division C4ISR, in Linköping, and one of the authors of the report.