The term threshold often appears in current defence policy documents – although usually without any explanation of what it means. An FOI report investigates what lies behind the concept. 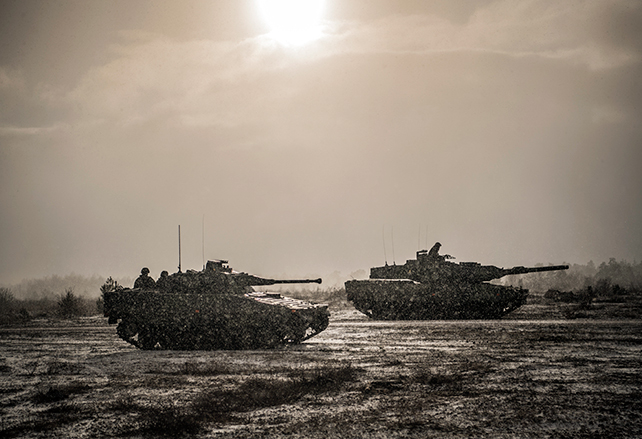 Combat Vehicle 90 and Tank 122 advance across a training area during a battle exercise on Gotland. Sweden’s stationing of military forces on Gotland has a deterrent effect on an aggressor. Photo: Bezav Mahmod/Armed Forces.

Threshold has become something of a fashionable concept in the defence sector. It is used in the Swedish parliament’s defence bills, and in the defence ministry’s military-strategic doctrine and perspective planning; it may even be mentioned several times in the same text, but to mean different things.

“It’s often used in serious contexts. But it’s difficult to put one’s finger on exactly what is intended in these policy documents. I’ve looked for an explanation, but haven’t found one,” says Robert Dalsjö, deputy research director at FOI.

The problem is that many use the concept, while they interpret it differently. At the same time, raising the threshold capability of Swedish defence is a political objective.

“If one discusses measures for increasing Swedish threshold capability, then one must know what the intention is. This has implications for the type of national defence one gets,” he says.

In the report, “Fem dimensioner av tröskelförsvar [Five dimensions of a threshold defence],” which was presented at the end of last year, he explores what the concept can mean. The report is summarized in a memo, The Six Functions of a Threshold – An Attempt at Conceptual Analysis.

“My opinion is that threshold has two main meanings: deterrence and defence,” says Robert Dalsjö.

He explains with a few examples.

The concept can have three additional connotations, as a marker, tripwire, and alarm bell, according to Robert Dalsjö. These reinforce deterrence or defence.

“It deals with characteristics or capabilities on the defender’s part that can influence an aggressor’s decisions,” says Robert Dalsjö.