FOI is developing methods to prevent electronic warfare in the field

A great deal of equipment accompanies a battalion when it deploys into the field. Technology such as computers and lighting may interfere with radio communications, however, which by extension risks affecting the capabilities of military bandwidths. FOI has been commissioned by FMV, the Swedish Defence Materiel Administration, to develop methods for preventing this type of problem. 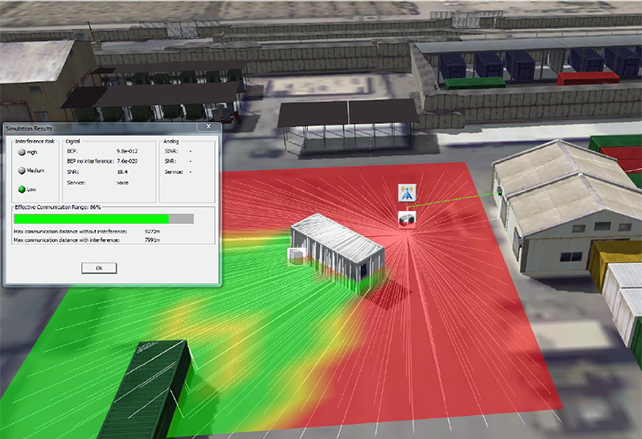 The green area marks where a regular computer can be placed to not risk to interfere with the radio receiver that is standing between the container and the light grey house. If the computer is placed within the red area instead there is a risk that the radio transmission is severely interfered.

FOI conducts research in electronic warfare, which involves the problems that arise when a communications system’s reception is negatively affected by electromagnetic interference. Examples of typical sources of interference include everyday things such as computers, microwave ovens, and low-energy LED lighting, and even charging equipment and windshield wiper motors.

Fixing problems at a late stage is costly and research is therefore needed to reinforce what the Armed Forces and FMV, the Swedish Defence Materiel Administration, know about electronic warfare. Since the beginning of the 2000s, FOI has been developing a tool called GENESIS, which is used for among other things educational purposes, to demonstrate what happens, for example, when civilian computers are close to a radio receiver.

“One easily ends up taking along a lot of different sources of interference into the field, equipment that shortens range, causes breaks in radio communication, or leads to missed calls. When computers are nearby, range can decrease by 60 percent,” relates Kia Wiklundh, Deputy Research Director in FOI’s Division C4ISR (Command, Control, Communications, Computers, Intelligence, Surveillance and Reconnaissance).

With the aid of GENESIS, it is possible, among other things, to assess the effect of both the placement of the source of interference and the measures implemented to reduce the risk of electronic warfare.

FOI has a new method for finding the worst interference source

Apart from GENESIS, FOI has also developed a new method, ICF Total, which can identify the worst interference source.

To prevent electronic warfare, FOI also works with a portable measuring system that can warn of jamming transmitters on the same frequency as those that GPS transmitters use. According to Kia Wiklundh, jammers are common among commercial drivers and tradespeople.

“They don’t always want their employers to be able to see where they’ve been driving, so they use jammers. With the portable measurement system, it’s possible to log the incidents that occur, both their times and levels of effect. The system can also be adjusted relatively easily for measuring interference from the frequencies used by FM,” she concludes.