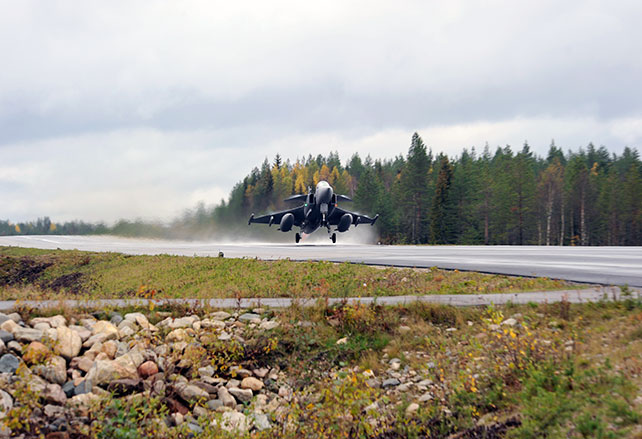 A Jas 39 Gripen take off from the Hosio road base in conjunction with a military exercise in Finland in 2015. Photo: Louise Levin/Swedish Armed Forces.

On 13-14 November, a meeting of defence ministers is being held within the frame of NORDEFCO (Nordic Defence Cooperation), wherein a new vision for Nordic defence cooperation will be adopted. NORDEFCO was formed in 2009, although the primary aim of cooperation then was to save money, at a time when the Nordic countries mostly focused on crisis management outside Europe. But a change in the northern European security landscape has meant that today’s cooperation is driven by defence requirements and is significantly more extensive.

The countries have for example simplified the procedures for gaining access to each other’s airspace and territorial waters; they offer each other landing sites and harbours as well as exchange information regarding common operational pictures. The country’s air forces regularly train together within the frame of so-called Cross Border Training.

“Just now discussions are being held on sharing raw data regarding the situation in the air, which would provide a much more complete operational picture, in contrast to today’s filtered information exchange,” relates Deputy Research Director Eva Hagström Frisell, who conducted the study together with FOI colleagues Johan Engvall and Madelene Lindström.

Sweden and Finland have much in common as alliance-free countries located in proximity to Russia. This has led to particularly comprehensive cooperation between these countries at all levels: everything from close contact at the highest level to tight cooperation between individual units, to develop different capabilities and be able to act jointly both in crisis as well as in war. But there are still things to learn, to pay attention to and deal with, such as the fact that the armed forces have different capabilities, command structures, and equipment.

“Overall, an important difference is that Finland retained its invasion defence, while Sweden mainly remodelled its defence for international crisis management. At the same time, on a more down-to-earth level, such things as language and culture can be a greater challenge,” says Eva Hagström Frisell.

Increased cooperation between Norway and Denmark

Norway and Denmark have through the years prioritised NATO cooperation. But the new security situation in the Nordic region has also increased their interest in cooperation. For example, Sweden and Denmark signed a new defence agreement, primarily relating to aviation cooperation, and under which naval cooperation is now being considered. It is true that Swedish-Norwegian cooperation has been bruised in connection with discontinued materiel procurement projects. But in other areas cooperation has progressed well, not least between the countries’ air forces, which may fly over each other’s territory and exchange operational pictures.

The extensive cooperation between alliance-free Sweden and Finland and the two NATO countries, Denmark and Norway, will provide stronger defence both nationally and jointly, but this has its limitations and risks with regard to security policy, the study notes.

“Cooperation can increase the risk of being drawn into conflicts. For example, if Sweden and Finland share information with their Nordic neighbours and allow them to fly over their territory in a crisis. At the same time, it’s unlikely that an individual country would be able to remain outside of a conflict occurring in the region,” says Eva Hagström Frisell.

She continues: “Sweden has furthermore adopted a solidarity declaration whereby it will help other Nordic countries as well as EU countries if they are attacked. The major question now is whether Nordic cooperation will also be fully developed to include crisis and war, when the need for coordination should be at least as important as in peacetime.”