Increases in defence allocation eaten up by index recalculation

Although defence allocations have grown in recent years, they have been almost entirely erased by the annual recalculation using the Defence Price Index. This is shown by calculations from FOI. 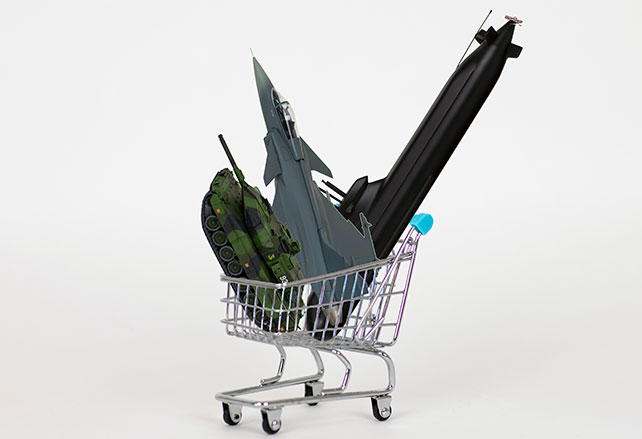 The Swedish Armed Forces’ allocations are recalculated annually using the Defence Price Index, DPI. The purpose of the recalculation is to compensate for changes in the price of defence. But in actual fact this has often led to reductions in the allocations.

The method for calculating DPI with regard to defence materiel was changed in 2012. Now, in a new report, FOI economist Peter Nordlund has calculated what the changes have entailed for the Armed Forces’ allocations.

Allocations for the 2018 budget year are 2.5 billion kronor less than they would have been in the earlier recalculation system. The report shows that in total the allocations have decreased by 8.7 billion kronor from 2012-18. The reductions tend to accumulate and become greater from year to year.

The 2015 defence bill called for a substantial boost in the budget of the Armed Forces for the first time in many years. The so-called basic financing of 5.6 billion kronor for the period 2016-20 was increased by an additional 10.2 billion kronor. But the increase has not led to the boost that was envisioned.

“In principle, the entire supplementary amount was eaten up by the effect of the recalculation using the unpredictable calculation mechanism, DPI,” says Peter Nordlund.

A new model is needed

The purpose of the report is to provide the groundwork for discussions and decisions about revising the DPI in the form it has been in since 2012.

“In its present form, the DPI doesn’t compensate the Armed Forces for changes in the price of materiel. We should review this and search for another model for defence materiel,” says Peter Nordlund.

He points out that the annual recalculations also have other effects. Politicians decide on allocations on the basis of certain intentions. These allocations are calculated annually with the DPI. This may mean that the Armed Forces will need to reduce its activities in a manner not intended by the politicians. In this way the DPI evolves into what, in their report, the FOI researchers call an “invisible decision-maker.”

“The politicians have little awareness of the effect of the DPI. They have to learn the system. Otherwise they relinquish a major part of their influence on defence expenditures and along with that the development of defence capability.”

Until 2012, the method for calculating the Defence Price Index built to a great extent on the formulation of contracts with the defence industry and currency effects in procurement and maintenance of defence materiel. These considerations of defence-specific issues have subsequently been removed.