A 2018 FOI report on the Syrian civil war notes that foreign interventions are increasingly freezing the conflict. The study builds on interviews with everybody from politicians and military personnel to religious leaders and aid workers. 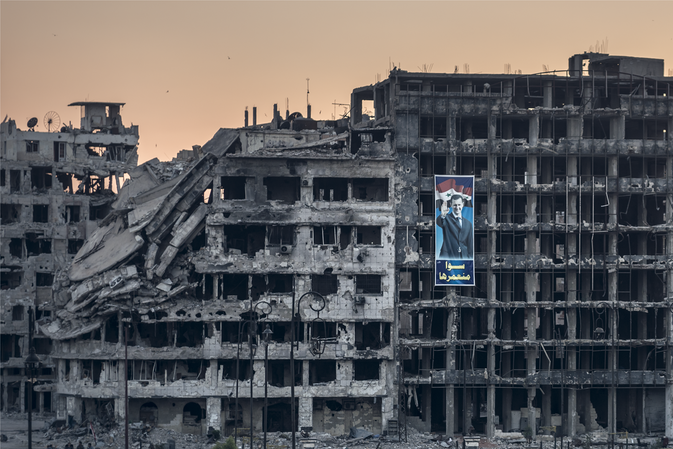 An election campaign poster for President Bashar al-Assad displayed on a ruined shopping mall in the Khalidiya district of Homs, shortly after Government forces regained control of the area. Photo: Sergey Ponomarev.

The report was written by Middle East expert Aron Lund, on a commission from FOI. According to the report, the war – after the USA’s intervention in 2014, which was followed by those of Russia and Turkey in 2015 and 2016, respectively – increasingly resembles a frozen conflict.

“Even if the war has been surging back and forth for seven years, it has become something that for now seems to be a prolonged freezing of the situation. None of the sides in Syria can start a major offensive against each other, because then they’d be stepping onto the territory of one of the foreign players. The USA and Russia are supporting different sides, but the last thing they want is to be fighting against each other,” says Aron Lund.

Russia has used its veto

The larger part of Syria is still controlled by President Bashar al-Assad’s government troops, which Russia is allied with. The USA, for its part, supports Syrian democratic forces. They are a mix of Kurdish and Arab groups, who control about a quarter of the country. In the north-western part, there are also rebel forces supported by Turkey. They are left from the original uprising against Assad; many have an Islamist profile and, in some cases, are connected to al-Qaida.

Even if there have been many attempts to mediate in the conflict, Assad and the government forces appear to have won the war, ascertains Aron Lund.

“The UN’s peace processes have hardly influenced the conflict at all. This is because the permanent members of the Security Council have been in a complete deadlock. Countries sympathetic to the opposition have usually constituted the majority on the council. But for such proposals as imposing sanctions on Assad, Russia has used its veto, with the support of China. This has tied the UN’s hands.”

Reconstruction aid, or not?

The report points to a number of important questions that will determine the future for Assad and Syria. Several of them are in the hands of the foreign actors. Will the USA, for example, return “its” areas to Assad, or will it remain in Syria for the long term?

“It involves areas that the USA has gained control over almost by chance in the war that it waged against the Islamic State, IS, together with the Syrian democratic forces. At the moment, the realisation is that they’ll be staying in these areas,” says Aron Lund.

Another important issue involves reconstruction aid. As long as Assad remains in power, both the USA and EU refuse to contribute to reconstruction. Russia maintains that aid is essential if refugees are going to be able to return to the country.

“Their return is in the interest of both Syria’s neighbours and Europe, which was deeply shaken by the 2015 refugee situation. Russia sees this as the winning question. If Assad’s government is going to be able to receive refugees, it will need to build houses and get the economy going. Progress in this question is going to be of great importance for both the refugees and Syria itself,” concludes Aron Lund.