Power competition and natural resources behind military presence in Africa

What are the militaries of other countries doing in Africa and why are they there? In a systematic analysis, FOI has examined the presence of twelve non-African state actors in Africa. The extensive report not only identifies but also explains the motives behind the actors’ military bases on the continent. 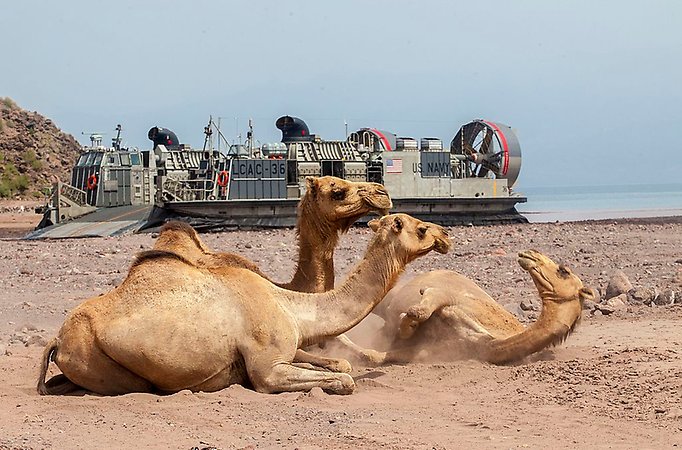 “Our mapping shows that the presence of military bases has increased, especially in the Horn of Africa and West Africa. Strategic interests, such as protecting economic interests, power competition, shows of military force, and maintaining historic ties, often lie behind the increase,” says Karolina Gasinska, Senior Analyst in FOI’s Defence Analysis Division, in Kista.

Together with eight other security policy experts, she has studied and analysed open sources to identify the military bases of twelve non-African countries. Here, “bases” implies military installations, both permanent and temporary, large and small. * (see the fact box below)

“The report’s primary purpose is to increase the understanding of foreign states’ military interests in Africa. The trends are clear. On Africa’s Horn, there are three main categories of strategic interests: securing maritime trade, creating stability in violent regions, and power positioning among Middle Eastern countries. In West Africa, the focus is more on fighting terrorism and controlling illegal migration,” she says.

“But since the beginning of the 2000s, there has been renewed interest in Africa. The USA has established a major military presence on the continent and new actors such as China, Turkey, and the United Arab Emirates have set up military bases. Even such traditional actors as France and Italy have increased their military presence. This development indicates that Africa is of growing strategic interest for many countries,” says Karolina Gasinska.

Africa is a raw materials-producing continent and approximately 90 per cent of all international trade goods are transported by sea. It is thus not difficult to understand why the military bases are also situated along the coasts.

“Africa is extremely interesting for those who are after raw materials, for example minerals and oil. It’s obvious that controlling the small number of harbours becomes attractive,” she says.

Protecting their own interests

The establishment of a military presence is often very much about protecting one’s own interests.

“For example, France, a former colonial power, chooses to intervene in Mali’s disturbances because this furthers its own interests. Likewise, Italy is active in Libya not only because of the refugee flows that arose in 2015, but also to protect its energy supply.”

Sometimes, bases have been established to assist the host country in dealing with a problem, such as for example pirates off Somalia’s coast. Although there has been a marked reduction in pirate attacks, the bases remain.

“The reason is primarily to protect their own transports between Asia and Europe as they transit the Horn of Africa, as well as transports to and from the continent,” says Karolina Gasinska.

But establishing a military presence in Africa is not always only for economic reasons.

“Much of it is a power game. Countries that want to show they are a global power establish military bases in Africa. Having moved away from wanting to suppress terror around the world, it seems that we are at least partially back in the same situation as during the Cold War. Russia and China want to show their muscles. Competition for power and rivalry among Middle Eastern powers is also being played out in Africa.” 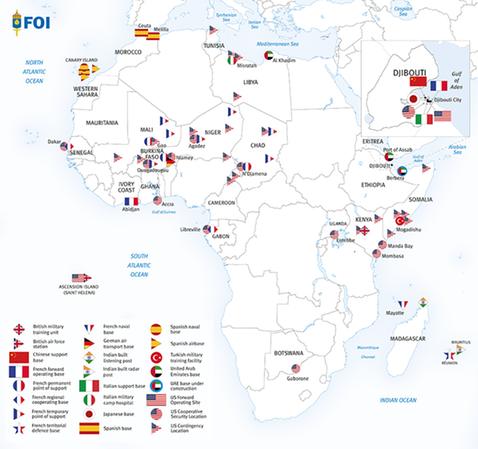 An overview of military bases and installations in Africa. Click on the image to view a bigger version of it.

The report, Foreign military bases and installations in Africa, was commissioned by the Ministry of Defence and concerns only military installations that are the result of bilateral agreements; in other words, it does not include bases that are part of either a UN mission or some other international organisation.