When a suspicious object, for example a suitcase abandoned at an airline terminal, needs to be investigated, there is always a risk that someone might be injured. With new methods designed by FOI, explosives can be identified at a distance.

The new methods for remote detection of bombs have been developed by FOI at the request of EU and MSB – the Swedish Civil Contingencies Agency – among others. The research has been underway for almost ten years. One of its purposes is to make it both simpler and safer to identify and detect explosives. When a suspicious object is found today, the area around it may be cordoned off for long periods, and there is a risk that members of the police’s bomb squad will be injured while examining it.

“There are three bomb squads in Sweden, so it may take a while before one of them can arrive at the scene. But with technology that makes it possible to evaluate whether the suspicious object contains explosive materials, the work goes faster, at the same time as the risk of injury is reduced,” says Henric Östmark, research director at FOI’s division of Defence and Security, Systems and Technology, in Grindsjön.

These remote measuring techniques can also be used to detect trace evidence of bomb-making. For example, the eventual attacks on the London subway and bus system in 2005 could have been prevented with the aid of the new technology, explains Henric Östmark.

Another aim in developing the technology is to make it easier to discover road bombs. In Afghanistan, Swedish soldiers have been killed when driving over bombs buried in the ground and remotely detonated. If such explosive devices could be identified before the military forces arrive, many lives could be spared. 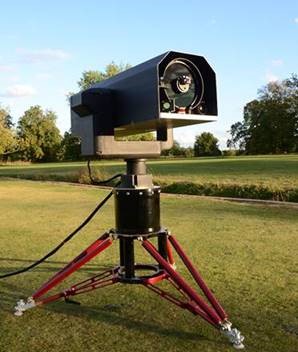 Close up of the detector. Photo: FOI.

An instrument for forensic studies

FOI is currently testing a prototype of a detector that can detect tiny traces of bomb manufacturing from a distance of 10-20 metres. Surveillance is performed using a type of laser that is neither visible nor damaging for the eyes. But, because the equipment is expensive, the research utilises the same inexpensive electronic components found in projectors, thus reducing costs and the size of the detector.

Henric Östmark and his colleagues are also in the process of developing the technology so that it can be employed in forensic studies.
“We are going to design an instrument that can be used to simplify and improve analyses at crime scenes where one suspects there may be remnants of a bomb factory or explosion. This is one of several things we’re working on at the moment,” he concludes.