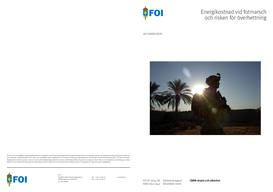 Physical performance can be impaired at raised body temperature. As for the Armed Forces thermal unbalance can occur during missions in tropical or desert climate, but can also arise in Sweden. Foot march is one activity that can proceed for a considerable time period and hence, is associated with raised risk of heat exhaustion. Metabolic power has been measured during foot march on various flat terrains a) gravel road with hard surface, b) ploughed field, overgrown with grass, c) dry bog and d) forest path (slightly hilly). The mass of the carried load was either 22 kg or 35 kg including field uniform, weapon and ballistic vest. Power of walking in daylight was compared with walking in the dark on a gravel road and in the forest (NIR-goggles were used). Transport cost, TpC (J/(mkg)), energy cost (J) per unit of total mass (kg) and distance (m), was 3,9 J/(mkg) (gravel road), 5,9 J/(mkg) (ploughed field) and 7,9 J/(mkg) (dry bog). Mass hardly affected TpC. The self-chosen speed was 1,5 m/s, 1,2 m/s and 1,0 m/s, respectively. Speed was reduced only marginally when 35 kg was carried. TpC for the somewhat hilly forest path was 6,7 J/(mkg) and the speed was 1,1 m/s (carried load 35 kg). Rapid march (jogging) was also conducted carrying 22 kg. Speed was set to 2,2 m/s and this gave a TpC of 5 J/(mkg). Darkness did not affect speed, 1,5 m/s, nor TpC, 4,7 J/(mkg), when walking on a gravel road (slightly hilly with somewhat rough surface). On the contrary, darkness increased TpC substantially, from 6,7 J/(mkg) to 8,8 J/(mkg) I the forest and speed was reduced from 1,2 m/s to 1,0 m/s. Based upon TpC, the risk of heat related problems due to a long foot march has been calculated for climatic conditions typical for Sweden, Serbia, Tchad, Somalia, DR Congo, Afghanistan and Iraq. To minimize the risk of heat exhaustion the upper limit of heat storage at long duration exposure was set to 6 kJ/kg. For the mentioned countries the 6 h and 40 min long march (50/10 min work/rest and 1 h lunch break) can be conducted with minor risk of heat failure if speed is adapted and a light combat uniform is worn together with a ballistic vest. Nevertheless, during the warmest months in Iraq and Tchad walking at the speed 0,9 m/s on a level, hard gravel road carrying 35 kg produces too much heat. Provided that the body armour is carried a modified march discipline is needed if external cooling cannot be provided. Water loss is closely related to body heat storage. If it has reached 6 kJ/kg at the end of the march the water loss has been roughly 0,8 l per hour of walking.