Comparing energy use by gender, age and income in some European countries 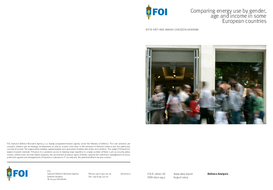 Differences in household total energy use in different countries have mainly been explained by levels of income/expenditure. However, studies of gender consumption patterns show that men eat more meat than women and drive longer distances, potentially leading to higher total energy use by men. This study examined the total energy use for men's and women's consumption patterns in four European countries (Germany, Norway, Greece and Sweden) by studying single households. Significant differences in total energy use were found in two countries, Greece and Sweden. Housing, food and transport constituted 61-76% of total energy consumption in the four countries, regardless of gender. The largest differences found between men and women were for travel and restaurants, alcohol and tobacco, where men used substantially more energy than women. Men consumed 70-80% more energy on transport than women in Germany and Norway, 100% more in Sweden and 350% more in Greece. These differences were mostly explained by men's higher operating costs for cars, including fuel, repairs and spare parts. For items such as medicine, household textiles, furniture and food, women used more energy than men, but the differences between male and female households were rather small. We also calculated the total energy use for single households, with or without children, in different age and income groups in Germany and Sweden. Singles with children used more energy than singles without children. The differences between Swedish men and women decreased when they had dependent children, while the opposite was true for German men and women. A comparison of the energy consumption for different age groups showed that the youngest singles (born after 1979) used the least energy (about 50% of that used by the average single man or woman) and the proportion of energy for housing increased with age. Furthermore, energy use increased more or less linearly with expenditure, while energy intensity remained constant. Assessment of CO2 emissions from Swedish single households showed emission levels of 10 700 kg/year for men and 8 500 kg/year for women. Food, housing and transport contributed about 75% of all emissions and there was a consistent tendency for CO2 intensity to increase with income. Despite shortcomings with the energy intensities used, the results for men's and women's energy consumption seemed robust. Further calculations for other countries can determine whether the pattern of higher male energy consumption is replicated there. Further studies are also recommended to determine the size of the female gender component in household energy use. Existing data in national consumer expenditure surveys can be used to test how gender as a background variable compares with factors such as age, education and geographical location. Our findings so far are policy-relevant for the EU, which aims to mainstream gender issues into all activities and to lower its total energy use and greenhouse gas emissions.