Biotechnology in Russia: Why is it not a success story? 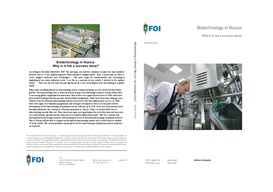 During the Cold War there was rapid growth in the area of biotechnology, not least for military applications, in the former Soviet Union. During the presidency of Boris Yeltsin in the Russian Federation. 1991-1999, the national biotechnology industry was privatized, which led to a near-collapse of state support for research and development in biotechnology. This resulted in financial difficulties for many companies and emigration of many leading scientists. In turn, to a great extent, imported biotechnology and pharmaceutical products replaced the domestically produced. In the process of economic modernization of Russian industry, biotechnology has been given higher priority since 2005. Funding for Russian biotech research was, however, estimated at only $0.04 billion per year while for China it was $1 billion and for the U.S. more than $10 billion. In addition, Russia ranked globally as only number 70 in the biotechnology area. Nevertheless, there are reasons for optimism about the future development of the Russian biotech industry, and there are more than 1000 institutes and organizations with, in many cases, highly qualified personnel conducting biotechnology research. The Russian Government and private industry are recognizing the urgent need for reforms to improve the legal and economic environment for the biotechnology industry, in order for it to become more competitive. To promote and improve coordination within the biotechnology sector, an ambitious National Program for the Development of Biotechnology 2006-2015 was developed, followed by the Development Strategy for the Biotechnology Industry in Russia 2010-2020. Regional biotechnology programmes have been developed and implemented in Kirov, Saratov and Tomsk. Associations sush as the Russian Society of Biotechnologists and the Union of Enterprises of the Biotechnology Industry played an important role in promoting biotechnology. It is also important to promote international cooperation and open up the market for foreigninvestment in order for Russia to make progress in the areas of biotechnology and pharmaceuticals. It was estimated that Russian biotechnology could grow by 25-30 per cent per year, which was much faster than the rate of growth of the pharmaceuticals industry, of 10-12 per cent per year. The growth sectors for Russian biotechnology were pharmaceuticals, dietary supplements, cosmetics, agriculture, food processing, and environmental technology. The government had emphasized that there was a need for a new relationship between research and business, including strengthening the innovation system. At the highest political level it had also been recognized that there was a need for Russia to produce its own drugs and that the present gap between research and commercialization must be bridged. The domestic biotechnology and pharmaceuticals manufactures had made too limited progress towards greater qualtity and compliance with international GMP (Good Manufacturing Practice) standards. The Russian pharmaceuticals market was one of the fastest-growing and tjhe eleventh-largest in the world. The government set its ambitions high in that by 2020 Russia should become the fifth leading economy in the world, which was not very realistic. The ambitions for the development of biotechnology until 2020 were also set veryhigh and could only be reached if extraordinary measures were taken and sufficient funding could be provided. Looking back at the difficulties Russia has had so far in promoting a competitive biotechnology and pharmaceuticals industry, the chances for success with these new plans are bleak.