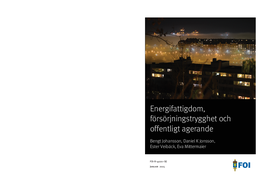 Energy poverty and fuel poverty are concepts that are used in a variety of ways, with different connotations depending on the context. The aim of this report is to increase the understanding of these concepts and how they relate to the more general concept of poverty. We also explore synergies and conflicts between the striving to achieve security of supply and the efforts to limit either energy or fuel poverty, or both, and how the degree to which energy or fuel poverty are widespread can lead to increased demand for changes in public policy. Energy poverty is in the context of developing countries usually understood as insufficient availability of modern energy carriers. In other cases, the focus is on the difficulties in managing energy costs and the ability of households to heat their homes (here, fuel poverty is used more widely than energy poverty). This latter perspective is the most common one in industrialised countries, and thus more relevant for Sweden. Transportation energy is seldom considered, which can be a problem, since the availability of transportation services can limit commuting options and the potential for rich leisure time. In some countries, such as the UK, fuel poverty is a key aspect of energy policy, whereas in the policies of several other EU member states, the importance of energy and fuel poverty is limited. Within the EU, a closely related concept, "vulnerable customers," has been integrated into energy policy regulation. Energy poverty also has natural connections to a broader poverty context. It is not evident, however, why energy poverty should be a separate aspect of poverty, when other fields of consumption, such as food or transport, are not treated separately in the same way. There are a great many factors that can affect how widespread energy poverty is within a society and what households' prerequisites are for handling energy costs. Examples of such factors that stretch over several policy fields are energy efficiency, the functioning of energy markets, energy tax levels, unemployment and the design of social security systems. There are clear connections between security of energy supply and energy poverty. A reliable energy supply, with a balance between supply and demand, improves the possibilities for avoiding major price increases, which would be especially difficult for households with limited economic resources. This shows a clear synergy between the targets for security of supply and the protection of economically vulnerable households. There are also potential conflicts. If large economic resources are spent on avoiding cuts in supply, for example by building redundancy in production and distribution systems, this could lead to increased system costs that have to be retrieved through higher energy prices. This could be especially problematic for resource-poor consumers, who in addition are probably not among those who will gain the most from those same security improvements. In the report, we discuss whether energy or fuel poverty, or both, can lead to increasing demands for public policies, for example, those that would restrict the currently dominant market paradigm. An increased focus on equity issues and vulnerable consumers can of course lead to various policy reforms. There is, however, no simple link between energy poverty and demands for sudden interventions, demands that can be manifested, for example, in the form of fuel protests.