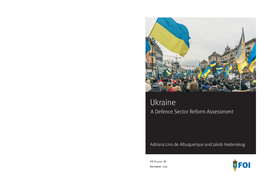 This report analyses the Ukrainian defence sector in order to identify reform needs for the purposes of long-term, needs-based, locally owned security sector reform (SSR) and capacity building objectives. We identify five broad issues recognized as being central to the development of a defence sector that upholds SSR ideals, namely democratic control of the armed forces, accountability, human rights, societal representativeness, and capacity and management. We find that the legal framework establishing democratic control of the Ukrainian Armed Forces is essentially in place, but that some potentially serious problems remain to be addressed. The most urgent problem identified in this report is the continued independence on the DUK volunteer battalion. The fact that the two volunteer battalions now incorporated under the MoD still remain intact is also problematic, since it raises questions regarding whether these battalions are more under de jure than de facto democratic control. Finally, the fact that the current Minister of Defence is a representative of the military and that the MoD largely lacks a civilian cadre without previous military affiliations are other issues believed to undermine democratic control of the Ukrainian Armed Forces. With regard to accountability, corruption in the defence sector remains perhaps the greatest reform challenge. Despite recent legal reforms, a new national anticorruption strategy, the establishment of two new institutions focusing on preventing and investigating corruption and international partners assisting in anticorruption, this issue is likely to continue to be a major problem for the foreseeable future. The Ukrainian government has yet to investigate allegations of human rights abuses by troops in former pro-government volunteer battalions during fighting in the East. Having said that, it has given retroactive jurisdiction to the ICC to hold troops accountable for human rights and war crimes abuses. Given that there are no statistics on the breakdown of the Ukrainian Armed Forces according to social class, ethnic affiliation and gender, assessing societal representativeness in the armed services is difficult. With regard to adopting a gender perspective in the defence sector, however, there appears to be very weak local ownership, at least within the government, for this type of reform. The overall capacity of the Armed Forces of Ukraine proved very poor during the Russian annexation of Crimea and in the early phase of the anti-terrorist operation (ATO) in Eastern Ukraine and also exposed serious weaknesses in logistics and military medicine. Given the centrality of capacity and management to military effectiveness - a priority for Ukraine given the current security situation - President Poroshenko has pushed forcefully for reform in these areas. In addition to national reform efforts seeking to restructure the logistics, procurement and military medicine systems, Ukraine has received substantial assistance through various NATO and bilateral programs for a broad range of capacity- and management-related areas.