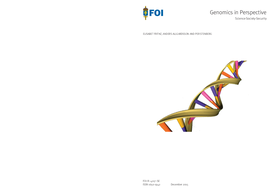 Ever since US President Clinton presented the first draft of the human genome, in a special ceremony in the White House in 2000, there have been exceptional advances in genomics and associated technologies. Today, the genomic material (DNA) from a vast array of organisms on earth, ranging from the simplest viruses and bacteria through worms, sponges and insects, to plants, reptiles and mammals, have been subjected to intensive genomic sequencing efforts. Even the DNA of extinct species like the mammoth has been sequenced. Notably, dangerous viruses such as Ebola and MERS (Middle East Respiratory Syndrome) can be sequenced within days, allowing their rapid diagnosis, tracking and isolation of patients. DNA sequencing and analysis are also being applied in other social sectors. For example, US police are already beginning to use DNA to decipher suspects' ethnic backgrounds and predict their appearance/facial features.1,2 In addition, in the beginning of 2015 the Obama administration launched an extensive science and healthcare program called "the Precision Medicine Initiative", essentially based on advances in genomics. It is envisioned that by analysing genomic and clinical data we will learn more about the underlying causes of tumours, inherited diseases and responses to drugs etc., which will enable healthcare practitioners to predict, diagnose and treat disease more efficiently in the future. Advances in genomics have also opened new possibilities to improve human welfare by facilitating genetic modification of livestock and crops. The Human Genome Project was the first mega-project in the biological sciences, similar in scale to the major initiatives seen in, for instance, physics. As genomics has evolved it has become a "Big Data science", demanding ever-increasing computer capacity for data storage and analysis, which will be comparable to capacities required by Twitter and YouTube within a decade according to some estimates. From a security perspective, many of the technological breakthroughs and results generated within genomics have the potential of being of dual-use. While they offer great promises for improving human health and welfare, they could also be potentially misused for adverse or hostile purposes. Genetic information can in itself be used to discredit political leaders by raising doubts about their ancestry, mental health, capabilities, etc. Furthermore, in combination with "gene-editing" (rewriting DNA), genomics raises prospects of the potential development of "ethnic bioweapons", e.g. modified bacteria and viruses targeting specific genetic vulnerabilities of human individuals. In a similar way, livestock and crops could be targeted. Below, we have listed a selection of future projections, thought-provoking applications, and associated questions, addressed in this report. These focal points are intended to give the reader a feeling for the opportunities that genomics is presenting, and the challenges it is posing, rather than exhaustively defining all of its potential consequences. ? DNA-sequencing of all humans. Will the DNA of every new-born baby be sequenced in the future? Currently, a human's total genome can be sequenced in 24 hours at a cost of US$ 1 000. In the future DNA sequencing will be even quicker, cheaper, and thus increasingly available to the general public. ? Predicting disease and personal characteristics. Currently it is possible to screen human embryos for genetic diseases such as cystic fibrosis and haemophilia. As our genomic knowledge expands, it will be possible to predict an individual's risks of developing increasing numbers of diseases as well as various cognitive abilities and personal traits. ? DNA-sequencing and reshaping animals and plants. Traditional breeding efforts have been labour-intensive, time-consuming and concentrated on economically significant 1 http://www.forensicmag.com/articles/2015/01/first-dna-phenotyped-image-person-interest-double-homicide. Accessed 2015-12-02. 2 http://www.forensicmag.com/articles/2015/09/defining-face-what-can-dna-phenotyping-really-tell-us-aboutunknown- sample. Accessed 2015-12-02. livestock and crops. However, the rapid advances in our ability to analyse and modify the DNA of any organism - domesticated or wild - will allow massive acceleration of breeding programs through the identification of valuable combinations of genes (e.g. for drought or high temperature tolerance), and populations of target organisms that carry them. ? Engineering new life forms. Combining knowledge of natural genomes with the ability to build synthetic DNA/genomes will also allow the creation of new life forms (forerunners are synthetic versions of polio, SARS and other viruses) and reconstruction of extinct species and pathogens. The examples described above are future projections (which may be realised surprisingly soon, given the exponential rates of recent advances), but our increasing ability to sequence and analyse DNA efficiently is also raising more immediate issues. Although we still have much to learn about how to interpret the vast amounts of DNA-data generated, these developments are expected to have consequences at many levels of society. For example: Health practitioners will see patients who have discovered they have genetic predispositions for various medical conditions, e.g. cardiovascular disease, depression, Alzheimer's disease or cancer. Will early medical consultation save money by reducing future care costs and suffering? Where do we draw the line considering ethics? Is it a good thing for people to know that they are "at risk"? Should insurance companies, employers, the police, etc., be able to access information on an individual's genetic makeup? How should we be able to protect our genetic integrity? Can we legislate against genetic discrimination? Of particular societal interest are the possibilities for the armed services, police and judicial services. Should they be able to identify individuals, determine family relationships, identify victims, and profile applicants for the armed forces to determine suitability, etc. (and, if so, who should set the criteria)? Politicians, civil and military service authorities at all levels should be interested in following the progress of genomics, particularly the medical, ethical, judicial, social and security implications.