Al-Shabaab, the armed Islamist group in Somalia, also attacks targets in neighbouring countries. But Kenya has been much harder afflicted by terror than Ethiopia. One reason may be differences in the status of the Muslim populations in the two countries, according to a new report from FOI. 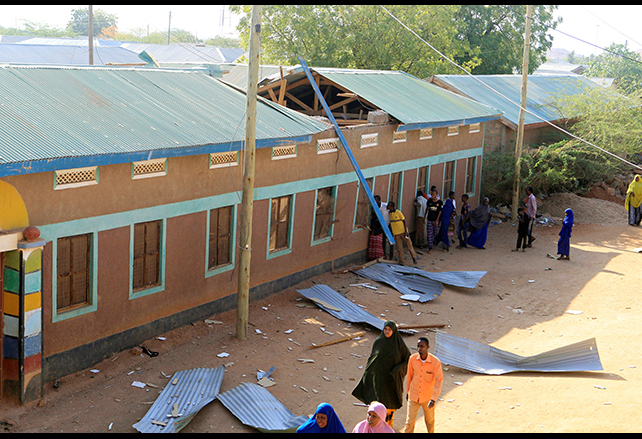 Photo: Reuters. Devastation after an al Shabaab-attack in the Kenyan city Mandera.

Somalia has been a trouble spot since the 1990s, with terrorism and conflicts. The Islamist group, al-Shabaab, has had a significant role in the violence. Since the beginning of 2011, when the group was driven back by the peace-keeping force, AMISOM (African Union Mission to Somalia), it also began to attack targets in neighbouring countries.

Kenya is affected worst. Two large attacks, with many casualties, were against the Westgate shopping mall, in 2013, and Garissa University College, two years later. Ethiopia has not been as heavily afflicted, even though, like Kenya, it has a long border with Somalia and a large Somali minority. Both countries contribute troops to AMISOM, which is fighting al-Shabaab in Somalia.

“It is somewhat surprising that al-Shabaab doesn’t operate in Ethiopia, given the scale of its activities in neighbouring Kenya. One reason may be that in Ethiopia there is not as much tension between the state and the Muslim population as is the case in Kenya. The status of Muslims relative to that of Christian Ethiopians has improved since 1974, when the Christian emperor, Haile Selassie, was deposed and succeeded by a communist, anti-religious regime,” says Daniel Torbjörnsson, a research assistant in FOI’s Defence Analysis Division.

He is the author of the report, in which he examines the background for understanding why Kenya is more vulnerable to terrorism than Ethiopia. Historically, Muslims have been marginalised in both countries. But in Kenya, unlike in Ethiopia, no improvement in the situation of Muslims is visible. They remain marginalised and hold fewer political posts.

Instead, the tensions between the regime and the Muslim population, of whom many are Somalis, have contributed to a certain amount of popular support for al-Shabaab, which allows it to see possibilities for recruiting members in Kenya. There is no such support in Ethiopia.

There is therefore no reason to believe that al-Shabaab is going to increase its terror activities in Ethiopia in the short term, according to Daniel Torbjörnsson. There is a risk in the long-term, however, that the increasing control that the Ethiopian regime exerts on the Muslim community may lead to tensions. The government supports more moderate Muslim communities and works against the more orthodox ones.

He is now continuing with his work in a project on another terror group, Boko Haram, and its sustainability in Nigeria. This involves enquiring into, among other things, the group’s leadership structure, recruitment and financing. In parallel with this, he works with lessons learned analysis for the Swedish Armed Forces.