The armed Islamist group, Boko Haram, has been weakened in Nigeria – but it’s too early to discount it. There’s a risk that the group may regain its strength. This is the conclusion of FOI analysts who have assessed the organisation’s sustainability. 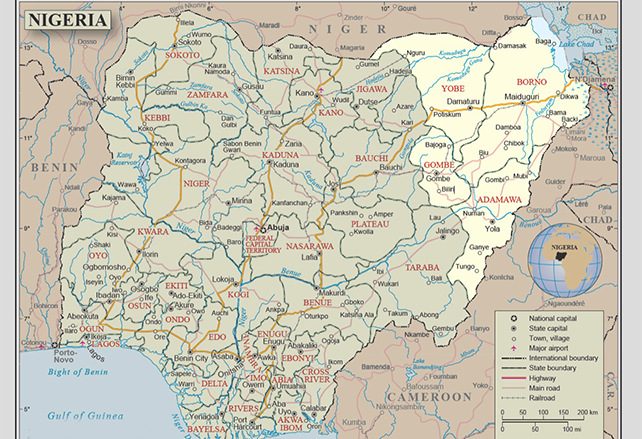 Map of Nigeria – Borno state is the marked area in the northeast.

The terror group Boko Haram has been spreading fear and unrest in Nigeria since 2009. At the beginning of 2015, the group controlled large areas of Borno state, in the country’s northeast. Since then, it has lost most of that ground, and split into two factions, as well as been pushed back by Nigeria’s military. According to statements from the country’s government, the group has been defeated.

“It’s not true. Boko Haram is weakened, but not defeated. And there’s a risk that it can become strong again,” says Daniel Torbjörnsson, a research assistant at FOI.

Together with his colleague, Michael Jonsson, he has assessed expectations about Boko Haram’survival. The analysis was commissioned by the Armed Forces and presented in a report just prior to year’s end.

“It is difficult to say just how big the organisation is,” according to Daniel Torbjörnsson. “But we do know that they have become fewer. According to one estimate, in 2014 they had between 15 000 and 20 000 members. Now there are approximately 6 000, of which 5 000 are in a faction led by Abu Musab al-Barnawi. This is a grouping that can become stronger. The reason is that al-Barnawi, in contrast to Abubakar Shekau, the leader of the other wing, has chosen not to go after civilians. This means that, potentially, he can regain the popular support he had earlier.”

“An important factor for the group’s survival is that it has popular support, which means that it can recruit manpower, and receive supplies and financing. Al-Barnawi is still managing to sustain his group without leaning on civilians. If he did that, he would lose the popular support that is his long-term advantage,” says Daniel Torbjörnsson.

Boko Haram is opposed by the Nigerian army, which has had a division stationed in the northeast since 2015. The army is receiving assistance from its neighbouring countries, Cameroon, Chad, Niger, and Benin, which have also been subjected to the group’s terror. Groups of civilians have also taken it upon themselves to defend towns and villages.

“Nigeria’s army is improving steadily, but still doesn’t have the capability to destroy the terror group completely,” according to Torbjörnsson. “And no one has managed to capture Shekau, yet, even though he has been hunted for several years. His group primarily attacks the civilian population and in that way can incur great damage with few resources, for example by using suicide-bombers.”

“Shekau is seen by the media and other actors as the dangerous one. We oppose that view. The group is dangerous and destructive in the short term, but it isn’t the biggest long-term threat. Al-Barnawi has greater capability for meeting Nigeria’s security forces,” says Michael Jonsson.

The terror group Boko Haram was formed in Nigeria, in 2002, to spread its version of Islam. The group has grown as a result of major regional, ethnic, and religious differences. Since 2009, the use of violence has been the group’s primary method in its fight to overthrow the country’s government and create an Islamic state. The organisation split into two parts, each with its own leader, in 2016. Abu Musab al-Barnawi has the most followers. The targets of his terror are the security forces and the Nigerian state, not civilian Muslims. The leader of the smaller faction is Abubakar Shekau. He is generally more ruthless and also more violent towards civilians. Boko Haram is a nickname, which can be interpreted as “Western education is forbidden (a sin).”