Russia sees Caucasus as its sphere of interest

Russia considers that Caucasus is a key area in its relations with the West and the Middle East. Russia’s military presence is high and local conflicts are used to keep the concerned nations in a constant state of Russian-controlled instability.

A Russian soldier in the Khushet village near the border between Russia and Georgia. Photo: SPUTNIK/Alamy Stock Photo.

FOI reaches this conclusion in a report delivered to the Ministry of Defence.

Caucasus, whose northern part belongs to Russia, while its southern part lies between the Caspian and Black Seas – including Georgia, Azerbaijan, and Armenia – is in the borderland between Europe and Asia, as well as between Christianity and Islam. The region is encircled by three major powers – Russia, Turkey, and Iran. Of these, only Russia has military bases and is ready to act militarily in the region, according to FOI’s researchers. This is expressed not only by its military presence, which is over-dimensioned for the region, but also by its willing­ness to foment local conflicts, such as between Georgia and the breakaway regions, South Ossetia and Abhkazia, and between Armenia and Azerbaijan, over Nagorno-Karabakh.

“The conflicts around the self-proclaimed but in practice Russian-controlled breakaway regions keep Georgia preoccupied and unable to join NATO. The conflict over Nagorno-Karabakh forces Armenia and Azerbaijan to stay on good terms with Russia,” says Jakob Hedenskog, security policy analyst at FOI and co-author, with Erika Holmquist and Johan Norberg, of the report.

In North Caucasus, the high military presence is also explained by a domino theory, connected to Chechnya.

“Russia fears that if Chechnya, which led a struggle for independence during the 1990s, were allowed to break away, then other North Caucasian republics as well as other Muslim areas in Russia, primarily Tatarstan, would also demand independence,” says Jakob Hedenskog.

Caucasus, first and foremost, is a Russian sphere of influence

Yet another reason for Russia’s strong military presence in the region is that Moscow sees it as an extension of the Middle East. The bases in Armenia and on occupied territory in Georgia provide Russia with a military proximity to present and future conflicts in that region.

Turkey and Iran seem to have accepted that Caucasus is primarily a Russian sphere of interest, according to Hedenskog.

“It’s true that Turkey has a close relationship with Azerbaijan, but the Turks lack a permanent military presence. Iran wants, above all, to develop trade and export energy now that the sanctions against it have disappeared,” he says.

Neither does the West, after Russia’s aggression in Ukraine, harbour any great interest in further irritating Russia in its own backyard, according to the report. But the unresolved conflicts do constitute a source of concern in the region and could exert an influence even beyond it.

“Russia has sold large quantities of arms to both Azerbaijan and Armenia, so an escalation of the fighting concerning Nagorno-Karabakh, such as last occurred in 2016, could have serious consequences. Neither can one rule out the possibility that the long-lasting, unresolved conflicts in Georgia might flare up again,” says Jakob Hedenskog.

On the other hand, he does not think it is likely that we will see a large-scale Russian invasion for the sake of regaining previous Soviet territory.

“Russia is already a huge country and isn’t interested in occupying new land areas. But the Russians do want to control and dominate their own neighbourhood, in what they consider is their own exclusive sphere of interest.” 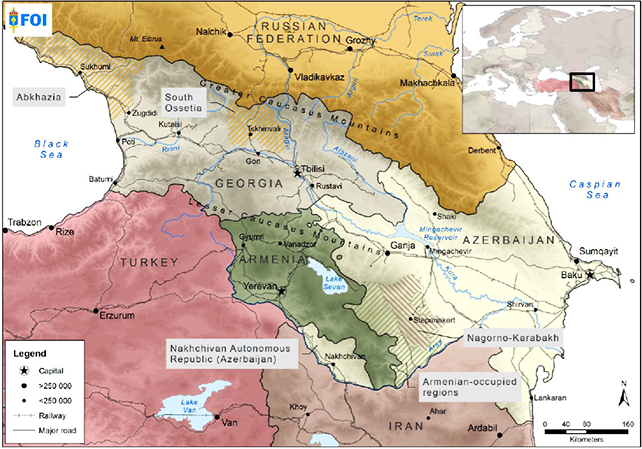 A map over Kaukasus with conflict areas marked out. Image: Per Wikström/FOI.