NATO still has a long way to go

NATO has had a certain success with the issue of gender, but there is still much room for improvement. This is the conclusion of FOI’s review of the progress of the military alliance’s gender policy. 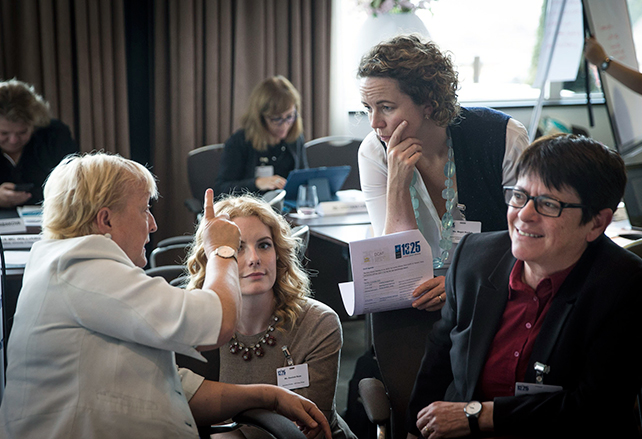 The photo was taken during a NATO workshop. Photo: Erik Luntang/NATO.

One of the greatest threats facing a successful implementation of NATO’s gender policy is the incomplete leadership that has resulted from important positions remaining vacant. There is also insufficient knowledge of how a gender perspective can become an integrated part of the alliance’s daily work. This is a vision that must be concretised.

“That the highest leadership supports the work on gender, and that there is a policy and an action plan in place are important basic requirements. NATO is deficient even on these fundamental issues, since its action plan lacks clear objectives,” says Helené Lackenbauer, who is behind the independent review, and a deputy research director at FOI.

The possibility to compare

Another important condition is the presence of sex-disaggregated data. This makes it possible to compare men’s and women’s situations, a kind of quantitative equality. But qualitative equality is also important. There must be women in positions of power and influence. In addition, both men and women must be given the possibility to combine work and family life.

The review also reveals differences between the military and civilian parts of NATO. The military side has made more progress in its gender work. This depends to a great extent on the fact that its control is more straightforward.

“This is probably because, on the military side, what one does or doesn’t do affects one’s career. Making the work move forward requires that managers are held responsible for what happens in their organisations. It has to affect salaries, promotions, and career possibilities; otherwise, developments won’t gain any speed,” explains Helené Lackenbauer.

NATO has difficulty recruiting women, however, to both its military and civilian sides. In social media, the organisation is illustrated using images of battle vehicles and aircraft. What isn’t shown is that there is a broad range of services, for example policy work, counselling, and programme management. This makes it difficult to recruit women to higher positions. But it is also makes it difficult to retain those women who are recruited for very long.

Knowledge gaps are an obstacle

To succeed in its efforts, it is also essential that the organisation understands what the gender issue entails, and that it educates everyone not only about the basic concepts but about how they can be implemented. Finally, the activities conducted need to be relevant and everything that is undertaken must be sustainable over time. There are shortcomings even here, the report indicates, primarily in education and understanding.

The foremost obstacles to successful implementation, as Helené Lackenbauer’s report highlights, are inadequate leadership as well as insufficient knowledge about how the gender perspective shall be integrated into the NATO alliance’s daily work.

“Everything is in place, but very little happens. It seems to be difficult to take the next step. But even if one thinks it’s going slowly, it’s good to remember that the very existence of an on-going discussion is influential. Positions gradually shift forward,” concludes Helené Lackenbauer.

The action plan that is the basis for NATO’s gender policy was adopted in 2014. According to the policy, which builds on UN Resolution 1325, on Women, Peace and Security, the action plan shall be reviewed at regular intervals. In 2017, the assignment went to FOI, which bases its review on a number of prerequisites that are considered to be fundamental for how gender mainstreaming should be conducted.