Back to the future: arms control in a time of increasing tension

The current security situation in Europe is characterised by tension and mistrust. Russia’s annexation of Crimea and military aggression in eastern Ukraine have led to a climate that many call a new Cold War. In this situation, conventional arms control and confidence-building measures have once again become topical issues. But is there any basis for a new arms control regime in Europe? 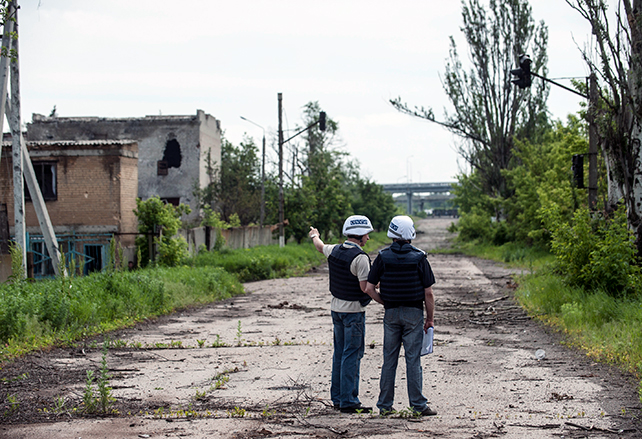 Two representatives from OSCE. That's an international organization that among other things deal with conflict management and rebuilding in Europe. Photo: OSCE/Evgeny Maloletka.

The answer to this and other questions can be found in a newly-published FOI report. The report analyses the military-political interests of Russia, USA, and a number of European states.

“One conclusion is that there is an underlying friction between the diplomatic interest in dialogue and negotiation and hard military security interests,” says Gudrun Persson, deputy research director and editor of the report. “As long as the two key actors – Russia and USA – remain dismissive about discussions of arms control, the prospects for achieving a breakthrough appear slim,” she continues.

When the current agreements were written, there was another situation and entirely different circumstances. The

Helsinki Agreement, for example, was signed in 1975.

“The Stockholm Conference, between 1984 and 1986, was also an important step for military confidence-building measures,” explains Johan Engvall, analyst and author of several of the chapters in the report, “as were, of course, the Charter of Paris and the 1990 Vienna Document.”

Then why have these questions reappeared on the agenda?

“The opening shot was in autumn 2016, when the then German foreign minister Steinmeier proposed arms control discussions as a possible way to defuse the increasing tension between Russia and the West. This dialogue-focused approach has a long tradition in German foreign policy,” observes Johan Engvall.

Russia and the West stand face-to-face once more

In a military-strategic perspective, the Baltic Sea region is conspicuous as a focal point in the confrontation between Russia and the West. The region has become a playing field for those competing interests that would see either rearmament or arms control as a response to the increasing tensions.

Russia has two distinct military-strategic priorities in the Baltic Sea region, shows the chapter by deputy research director Carolina Vendil Pallin. One is to constrain NATO’s possibilities for deploying additional combat forces to the region; the other is to ensure that non-NATO countries in the region continue to remain outside of the alliance.

For the tone-setting Western powers, not least the USA, the Baltic Sea region is important for NATO’s credibility, concludes the chapter by deputy research director Mike Winnerstig. The decision to maintain a strong forward presence is a way to reassure vulnerable members of the alliance’s collective support.

Deputy research director Robert Dalsjö, who was already working with arms control in the early 1990s, considers that it is no longer possible to deny that today Russia and the West are once again standing face-to-face against each other.

“Arms control cannot be separated from the fact that Russia and the West have completely different visions for European security. Whereas the West wants to retain the rule-based and cooperation-oriented security order, Russia wishes to establish a new order, where it would be granted its own privileged sphere of interest at the expense of its neighbours,” summarises Robert Dalsjö.