Large radar systems often use so-called group antenna-based radar systems, which are faster and deliver better detection than traditional radar systems. FOI is now evaluating whether these can also be used in drones. 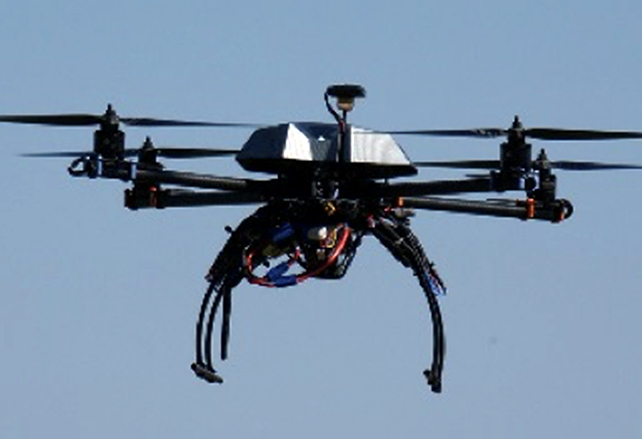 FOI is investigating whether new types of advanced radar sensors can be used for drones. Pho1to: FOI.

FOI has been working with radar systems that include group antennas for several years. The antennas do not rotate as normal radar antennas do and are thus not limited by the angular velocity, or speed of rotation. Instead, signals from many antennas are combined electronically, which means that they can rapidly change direction and “see” in several directions simultaneously. This enables them to sense the surroundings more swiftly and better than traditional radar antennas. This type of antenna is used for example in large modern radar systems and in the nose radars of fighter planes. They are also available for installation on drones but cost millions of kroner.

“We want to investigate the usefulness of installing new types of advanced radar sensors on drones,” says Jan Svedin, a Deputy Research Director at FOI.

These efforts are part of a larger project commissioned by the Armed Forces. The basic objective is to increase our knowledge of diverse types of radar systems. How easy is it, for example, to jam the simplest systems? And can they be used for jamming other systems?

“We also want to see how far one can get with simpler and cheaper SAR sensors. It’s also important to see how large a threat they can pose. The construction of both the hardware and software are open, accessible to everyone. Anybody can build one of these,” says Jan Svedin.

Electro-optical sensors, such as IR cameras, are often used in drones. They provide coarser resolution the higher the drone flies and are also limited by for example clouds, fog, and smoke. The resolution of SAR radar is not restricted by the altitude. The radar sees right through smoke and fog.

The group antennas of the FOI researchers have not yet been tested on flying drones. The goal, however, is that the technology will be used in the air.

“We plan to begin aerial radar measurements in the autumn. Initially, we’ll be evaluating the usefulness of a relatively simple SAR sensor on a smaller drone,” says Jan Svedin.