A war in a media shadow

There is a risk that the long-standing war in Yemen will only continue. External actors, such as Saudi Arabia, the United Arab Emirates, and Iran have become involved in the conflict, turning a local civil war into a large-scale regional one. A new FOI report analyses the situation in a country that is a victim of its strategic location. 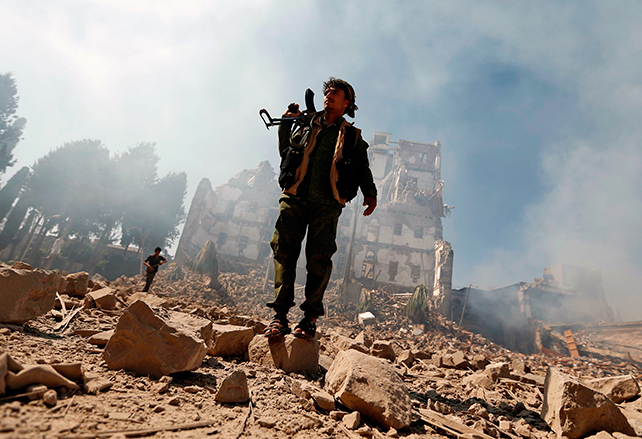 A Huthi rebel fighter inspect the damage in Sanaa after an air strike. Photo: AFP.

Since Saudi Arabia and the United Arab Emirates intervened militarily in Yemen in 2015, the situation has worsened dramatically and led to a humanitarian catastrophe. At least three million people are in flight from their homes, while close to 80 per cent of Yemen’s 22,5 million inhabitants are in need of humanitarian aid.

“The humanitarian crisis in Yemen is enormous and the UN describes it as the worst in the world. Supplies are having difficulty getting through, because of air and sea blockades. An on-going attack on the port city of Hudaida, which is the lifeline of about 70 per cent of the population, risks making the crisis much worse,” says Samuel Bergenwall, the FOI researcher who wrote the report.

Since 2004, the conflict between the Houthi rebel movement and Yemen’s central regime has proceeded sporadically. The war escalated in 2015, after the Houthis took Sana’a, the capital, and major land areas in the southern and eastern parts of the country. The reaction from Saudi Arabia and the United Arab Emirates was not long in coming. The two countries, which claim that Iran stands behind the Houthis, formed a coalition with a dozen Arab and African states. With support from the United Kingdom, France, and the USA, the coalition launched a military intervention in March 2015, with the aim of reinstating the Yemeni government and countering any increase in Iran’s influence.

During the intervention’s first year, the coalition had some successes, but today Houthis control 80 per cent of the country’s inhabited regions. The Houthis have gained in military capability, partially due to arms from Iran, and continuously attack Saudi Arabia’s territory with missiles.

“To end the war, coalition bombing needs to cease. At the same time, the Houthi missiles against Saudi cities and ships on the Red Sea must be stopped. But the situation is aggravated by the fact that the credibility and power of the new Saudi crown prince Muhammad bin Salman depends on the war’s being seen as a success,” explains Samuel Bergenwall.

But even if today’s conflicts ended, there is a risk that new conflicts will flare up. With a coast that faces vital international shipping lanes, Yemen has major strategic significance.

The absence of a strong central authority as well as the lack of a functioning economy means that numerous local actors profit from the continuation of the conflict.

“A wartime economy has emerged, which many actors profit from. All attempts by neutral countries to mediate in the conflict have failed. In the long term, stabilising the country would probably require independent peacekeeping missions, such as by the UN’s Blue Berets,” concludes Samuel Bergenwall.