FOI is participating in a satellite project with sensor systems that can discover and determine the position of satellites as well as other objects in space, including pure debris. The launch of Satellite SPARC-1 is at the beginning of May this year. 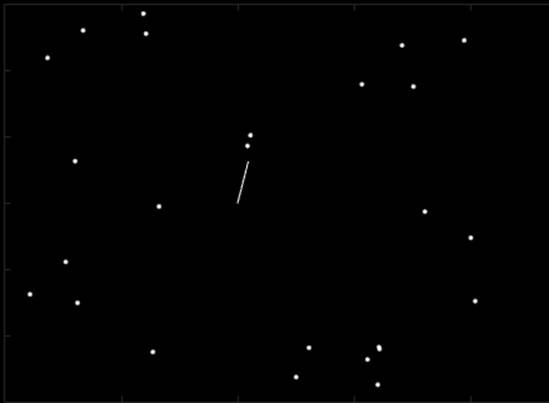 An example of what a photo taken by the star camera might look like: the points are stars and the streak is an object moving past; the image is a simulation from FOI’s planning tool.

Satellite technology has advanced rapidly. Satellites are generally smaller and more complex, and they are becoming ever more numerous in earth orbit. Additionally, more of them are flying in formation, which increases the need for an effective monitoring system.

“Our experiment deals with demonstrating the feasibility of using a modified star camera to measure objects in space. If it works, then in principle all satellites equipped with a star camera could be used in future for surveys in space. One simply gains a global network of space-based sensors,” says Sandra Lindström, researcher and project manager at FOI.

The satellite is a so-called 6 U CubeSat, with dimensions of 1 x 2 x 3 decimetres, about the size of a shoebox.

“What we want to do, concretely, is to verify first that the camera is working as expected. After that, we begin testing the technology, by for example measuring various bright space objects, at different distances and with different camera settings. In the last stage, we will for example be looking at which conditions provide the best possible orbital determination.”

Facts about the project

The project to demonstrate space-based surveying of objects (space situational awareness, SSA) is part of a cooperation between Sweden and the USA, called NAPA. FMV, the Swedish Defence Materiel Administration, heads the project, which is financed by the Swedish Armed Forces. The US participant is the air force’s research organisation, AFRL (Air Force Research Laboratory). AFRL has the responsibility for integrating and launching the satellite, and also has its own experiment on board the satellite.

FOI has long been involved in developing and maintaining space competence for the Swedish Armed Forces, within the frame of its research & technology development programme (RTD). One of the projects is focused on the field of space situational awareness.