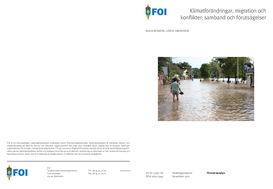 The aim of this report is to describe the connection between climate change, migration and conflicts, as well as to investigate projections of future migration that is driven by climate and environmental change. The analysis is based on peer-reviewed articles on the connection between climate change, migration and conflicts, as well as on various investigations and analyses of projected future migration flows. The report's final conclusions are as follows:  Migration can be permanent, circular or temporary. Historically, there seems to be a pattern whereby natural disasters mostly lead to temporary migration processes, while recurring natural changes, such as drought, in particular, lead to circular migration movements. Permanent migration seems to be strongly dependent on the economic and social prerequisites of individuals, as well as on the migration policies of the receiving countries. However, undermined livelihood appears to affect the character of migration, so that greater permanent migration may occur.  A common distinction is whether migration is international, or internal. Internal migration dominates prevailing migration patterns, and is also expected to do so in the future. Internal migration consists predominately of migration from rural to urban areas.  Few projections of future migration that is linked to climate and environmental change are made, which primarily depends on the difficulties in distinguishing changes in climate and environment as a single driving force. Also future migration is difficult to estimate in general terms. Rural-urban migration, however, is nevertheless also expected to dominate in the future;  The risk of conflict that results from migration are seldom dealt with in investigations. In those few investigations that have been made, the most important aspect for the consequences of migration is the receiving country's capacity for receiving migrants. This presents a foundation for the hypothesis that migration, irrespective of its character, particularly may be a problem particularly in regions that experience tension.  Migration always includes a degree of individual and collective decision. The concept of forced migration becomes important since climate and environmental changes can be a strong push-factor. This does not, however, imply that all who are affected will migrate.  The consequences of climate change on a society are dependent on the society's vulnerability, in which the latter's geographical and physical conditions lead to different challenges (e.g. for coastal areas, dry areas and mountain regions). However, societies' differs in how vulnerable or robust they are in facing change, and this capacity can either be developed or lost.  Those factors that seem to be most important for society's robustness in meeting change are similar whether due to changes in climate, conflicts and migration. It is pivotal, therefore, that challenges that are independent in character may include risks for societies that lack institutional capacity (so-called "weak states") and that these challenges may also lead to stresses in societies with well-functioning institutions (so-called "strong states").