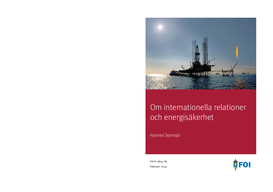 The policy aspect of energy is multi-faceted. It relates not only to economic growth, research and development or the environment but also to political stability and, in the long run, to international security. When discussing the concept of energy security it is important to, on the one hand, look at the energy system, i.e. what is to be secured, and on the other hand the proper security policies. Starting with the energy system, this is one which is characterised by constant development. The oil crises of the 1970's, increased energy consumption among industrialised countries, the introduction of nuclear power, political instability in energy-producing countries and the discussions on climate change are but a few examples of the dynamics of the energy system. Theories of international relations have, on the other hand, provided us with an understanding of how the security can be characterised in the future. Energy security has historically being discussed in terms of rivalry and conflict. The inevitable scarcity of non-renewable fossil fuels, such as oil and gas, together with a weakened global economy fit well in to the discourse of neo-realism and their criticism of a globalisation of thoughts and interests. Representatives of the neo-liberal school mean however that the view of a constant fighting over resources and territory is too deterministic and neglects the role of e.g. technical innovations and shared values. These aspects could provide a way out of conflict by creating substitutes for the diminishing resources as well as establishing institutions and platforms for cooperation. Energy security, in their view, is therefore best understood through economic terms such as the willingness of buyers to pay the market price of a commodity. The definition of energy security, as it has been discussed within the realm of international relations, has gone from a focus on the availability of a specific energy resource (mainly oil) to a more holistic approach in terms of energyvulnerabilities. From this point of view, the availability of an energy source is only one aspect. Robust infrastructure to secure production, transportation and distribution to clients is of equal importance and must be taken care of in order to reach true energy security. The question, then, is how to avoid that a widened definition of energy security, as the concept of energy-vulnerabilities implies, leads to a definition of security without any actual meaning - a security from everything and everywhere with no real guidance to which strategies to choose. One way out of this dilemma has been presented by the Copenhagen School who played a major role as a mediator between traditionalists and wideners in the academic field of security. The school's most acknowledged contribution has been the framework based on levels and sectors on the one hand and the concept of an actor-dependent securitisation on the other hand. Energy security has been, and will continue to be, understood differently depending on which aspects of this multi-faceted concept that lies in focus. This also implies that the strategies to reach security will differ among actors in the international system, not least between the exporter and importer but also between large and small costumers. The debate whether a system should be built on increased integration and global markets or on isolationism and bilateral contracts prevails and has become an obstacle in a more prosperous and longterm development of energy security. This report offers a more thorough analysis on the historical roots as well as future relevance of some major developments within the academic field of international relations.