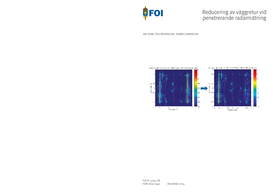 The report describes the work carried out in the project "Radar for battlefield surveillance", in a work package devoted to studying the possibility to mitigate the influence of the wall in imaging radar measurements through walls. The targets considered are stationary, where high-sensitive Doppler technique is not an option. The aim is to produce better reproduction of objects behind the wall, especially close to it, and hence gain better detection performance. The work has included an initial literature study, giving an impulse to test some methods on measured data. Two signal processing methods have been selected, diametrically opposed concerning their simplicity of implementation and their requirement of knowledge of the wall properties. The methods have been applied to FOI data obtained from ISAR measurements (Inverse Synthetic Aperture Radar) between 6 and 11 GHz of a wood cabin on a turntable. The first method, easy to implement, consists of applying a filter to the strong radar return from the wall itself. The filter is carefully adjusted in range across the return, which is set to zero in raw data before the generation of the ISAR image. The result is that objects directly behind the wall emerge with better contrast in ISAR images, giving better detectability of the objects. The same method is applicable in the case of SAR (Synthetic Aperture Radar). In the second method the wall is modeled as a surface with light, homogeneous roughness, for which a theory exists for the radar return. The method requires knowledge of the scattering properties of the wall, which depend on material and dimensions, which have to be measured or assumed from other a priori knowledge. The reduction of the wall consists of subtracting coherently (with phase) the calculated radar return from the measured return, also here before the generation of the ISAR image. The application of this method has not produced any useful result. However, no definite evaluation can be made since the implementation of the modeling can be developed further. This has not been possible to bring about within the limits of this work, mainly because the simulations have required long computer processing times. The applicability of the method in real cases can hence be questioned considering the accurate knowledge or estimate of the wall parameters that are required. The literature search has given a broader view of wall reduction methods, beyond the SAR/ISAR cases. Methods considered interesting include spatial filtering, special beamforming algorithms, and signal processing procedures that classify objects in the radar scene (wall etc.) with or without a priori knowledge about the wall. Also, various measuring methods have been proposed, for instance with multiple array antenna systems or with different standoff distances. The methods have not been tested on our FOI data. Mention should also be made of a well-known method in radar measurements, viz. background subtraction, which requires that it is possible to measure the observed area without target objects.