Results from the project AURES: Autonomous UGV-system for Reconnaissance and Surveillance 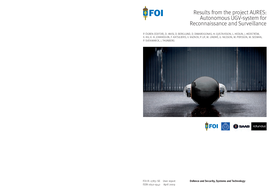 In this document, the results from the project AURES are reported. The aim of AURES is to develop, demonstrate and evaluate high level autonomous capabilities in a UGV system for reconnaissance and surveillance. The core functionality of a UGV surveillance system is to supply its operators with information, resulting in good situational awareness, i.e., knowledge about what goes on in the area of interest. To supply this information, most UGV systems are equipped with cameras, and the quality of the resulting awareness depends to a large extent on where those cameras are, when they are there, and what they are pointed at. This is the very focus area of AURES: how to move and point the UGV cameras over time to enhance the situational awareness of the operators. In detail, the results in this report include the following. Algorithms for positioning of the UGVs such that the cameras provide a concurrent line-of-sight perimeter surrounding a given object of interest. Algorithms for positioning of the UGVs such that the cameras provide concurrent video coverage of all designated walls, or objects of interest. A new patented teleoperation control mode that allows the operator to focus more on where he wants the UGV camera to be, than how the UGV should move in order to get it there. Algorithms for UGV motions that extend the effective range of a wireless network. Algorithms for efficiently patrolling an area in short time and finally algorithms for searching and securing an area to make sure no evader can remain unseen. Included in the document are also descriptions of the hardware, including the Groundbot, and software used, as well as the results of user discussions and evaluations carried out within the project. This report aims at being accessible to a wide range of readers, not only robotic researchers, but also potential UGV system users and other UGV stake holders. AURES started in January 2007 and finished in April 2009. The authors have the following affiliations. FOI: P. ¨ Ogren, J. Hedstr¨om, P. Lif, U. Nilsson, P. Svenmarck, KTH: D. Anisi, D. Dimarogonas, X. Hu, K. H. Johansson, F. Katsilieris, M. Lindh´e, J. Thunberg Saab: D. Berglund, H. Gustavsson, L. Hedlin, M. Persson, Rotundus: V. Kaznov, M. Seeman,