The risk of the spread of harmful micro­organisms is increasing. This in turn increases the need to be able to identify them quickly, especially in the field. FOI has studied current and future technologies. 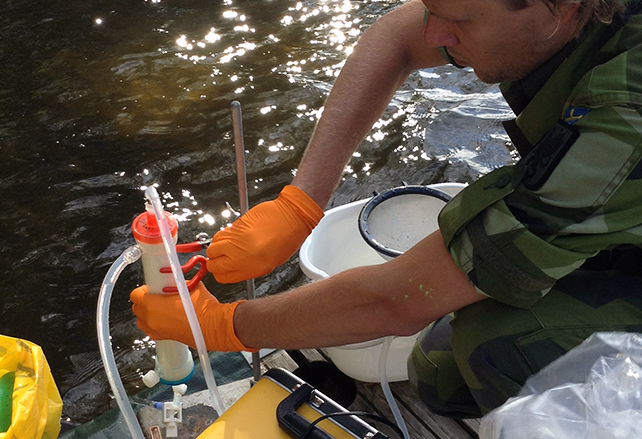 Tools for working with microorganisms have become both better and cheaper in recent years. It is possible to copy and modify the organisms’ smallest constituents and insert various kinds of mechanisms, using a variety of methods.

“Just as one can use technology to manipulate microorganisms for medical reasons, these methods can also be used in harmful ways. For example, nowadays there are techniques for producing modified microorganisms, which may contain genes that prevent the use of antibiotics, or that spread toxins. The accelerating spread of for instance antibiotic-resistant microorganisms may have other causes, such as increasing international travel and goods transport, among other things,” says Linda Karlsson, Research Engineer, with a focus on CBRN defence and security, at FOI in Umeå.

At the same time as the tools have become more refined, our knowledge of microorganisms has increased. States are no longer the only ones that can work with antibiotic resistance or the production of toxins. “Earlier, traditional biological weapons were interesting from a military perspective. Only a small number of high-risk organisms were studied. Military organisations knew exactly which countries were working with them. Most were airborne. This is no longer the case. Today, individuals or groups can both produce, buy, and spread microorganisms in a number of ways,” she says.

Comparisons with incidents that involved anthrax and nerve toxins lie close at hand.

“We don’t just want to know if a sample contains a specific organism, we want to know what all the micro­organisms in the sample are. Optimally, it should also warn of the presence of harmful ones, or if someone has tampered with them. Also, the analysis should preferably be ready within 60 minutes,” says Linda Karlsson.

The tool of the future

There are numerous techniques and tools for identifying microorganisms, but few live up to the requirements the report has set. Those that passed the review best are those that analyse the genetic information; that is, they sequence DNA or RNA. The technique is constantly improving. At the same time, it requires that genetic information is already available to compare with: data that is not connected to the technique, but to knowledge accumulation.

“Today there are handheld products that can manage quite a lot, such as sequencing several hundred parts of a gene, so-called base pairs, in less than 60 minutes. That’s pretty good, but an organism’s genetic material, or genome, can contain several million base pairs, so it will be a few more years before we have a product that can do everything we want it to today,” says Linda Karlsson.

The report not only describes today’s technology, but what can be expected within five to ten years, respectively. “I believe that within a few years we’ll be seeing products that use several techniques that collaborate: one to find biological material, another to identify it, and a third to perform risk assessments,” says Linda Karlsson.