Russia’s electronic warfare capability has developed powerfully in the last ten years. This applies to both offensive and defensive methods. But, as a FOI report discloses, what attracts most attention are offensive capabilities, often because of ignorance. 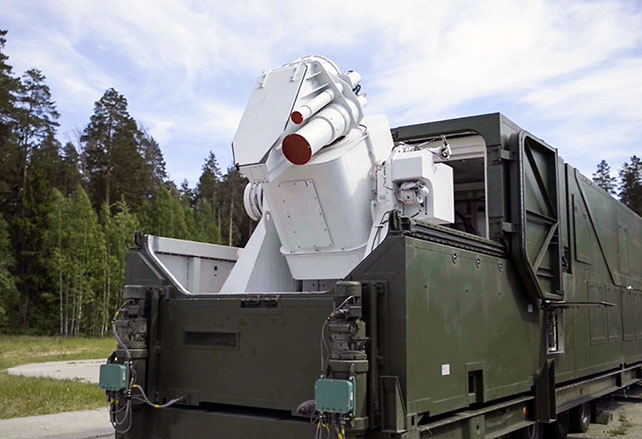 A Russian military vehicle with the laser weapon Peresvet. The ability to prevent a high-technology opponent from using its command and control systems is today considered crucial for modern warfare in Russia, both at tactical and operational levels. Photo: TT/NTB Scanpix.

“News media frequently describe Russia’s ability to knock out all of an enemy’s electronics ‘just by pushing a button.’ There are rumours of impenetrable domes surrounding their own troops in Syria, inaccessible to reconnaissance and attack. But it’s mostly myth, exaggeration and propaganda from the Russian military and industry,” says Jonas Kjellén.

He is an analyst in the Defence Analysis Division, in Kista, and author of the report, Russian Electronic Warfare. The Role of Electronic Warfare in the Russian Armed Forces, and considers that the above descriptions are enormous simplifications.

“Electronic warfare often deals with degrading the enemy’s sensor and weapons systems. This can involve jamming a smart missile so that it shoots off in the wrong direction, causing an artillery shell to detonate prematurely, or interfering with a GPS-guided bomb so that its accuracy deteriorates from decimetres to metres. So, any similarity with an ‘impenetrable electronic dome’ is simply wrong,” he says.

“The misconceptions depend among other things on the fact that the technology of electronic warfare is difficult to understand. For a layman, it can be next to impossible to say whether an antenna is intended for listening or attacking, whether it involves microwaves or lasers, or how long the range is. But that the Russian military’s activities have increased, that’s easier to notice.”

From the position of an underdog

“Defensive and preventive measures have to a great degree been neglected. Russia can’t afford to keep up with the West’s military technology development; it’s simply cheaper to find technical solutions for avoiding discovery and ensuring protection. This can involve, for example, signature reduction – that is, different kinds of camouflage – or self-monitoring to reduce the risk of spreading information that leads to detection.”

Jonas Kjellén describes how between 2008-2018 the country deployed an incredibly large quantity of new electronic warfare materiel. One explanation for why they have been capable of this is that they have been able to build on a number of Soviet projects that were mothballed during the 1990s.

“It may seem strange that they’re going back to such old ideas, but this is what’s happening. These projects were intended to operate against the USA and NATO, which is why they fit with Russia’s current threat picture,” says Jonas Kjellén.

What will happen when they run out of research projects to dust off?

“Russia is most probably going to continue on the same path, but not at all with the same pace of development as during the last ten years. They are not only working on jamming but also on how to destroy electronics. Electronic warfare is the Russians’ solution for dealing with deficiencies in traditional military means. In this way, with electronic warfare, they continue to strive to be a military superpower, but from the position of an underdog.”